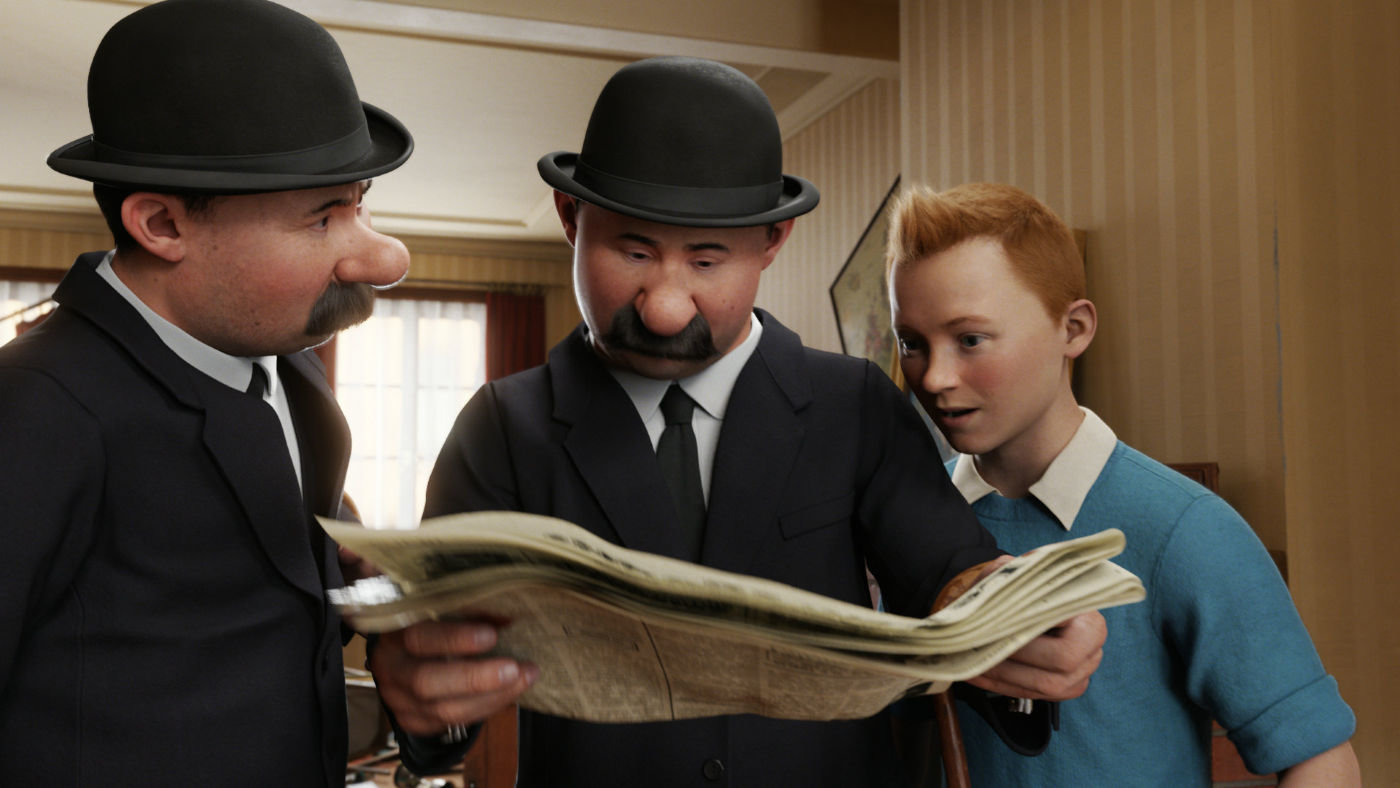 Steven Spielberg's The Adventures of Tintin: The Secret of the Unicorn, produced by Peter Jackson, saw its North American premiere last week when it closed this year's edition of the AFI FEST. Though it won't open wide in the States until December 21, when it goes up against David Fincher's The Girl with the Dragon Tattoo and Brad Bird's Mission: Impossible - Ghost Protocol and, a few days later, Spielberg's own War Horse — as Michael Cieply reports in the New York Times, it's going to be "a hot and crowded holiday at the box office" — it's been dominating 40-some-odd other markets since it began rolling out a little over two weeks ago. I thought we'd quickly check in on how things have been going for Tintin since our first roundup sort of petered out and lost interest a few days after the world premiere in Brussels.

The first piece to mention would be Mark O'Connell's primer on Tintinology, posted at the New Yorker's Book Bench on October 27:

For those unfamiliar with the Tintin books, the idea of sustained intellectual engagement with a children's comic book in which a cub reporter and his small dog solve mysteries might seem odd, but some serious work has been done in the area…. In 2009, Stanford University Press published an English translation of The Metamorphosis of Tintin: or Tintin for Adults, Jean-Marie Apostolides's 'foundational' work in the field. The book, first published in French in 1984, presents a psychoanalytic examination of characters, themes, and motifs in the comics. In the early books, Apostolides argues, Tintin's moral framework is strictly Manichean (he sees the world in terms of a radical division into, and an ongoing struggle between, good and evil) and, therefore, authoritarian. But as the comics progress and as Tintin matures, he begins to construct a kind of de facto 'family' around himself, and the moral ambiguities and compromises necessary in order to live peacefully with others lead him into a modern liberal ideology….

Perhaps the most remarkable entry in the Tintinology canon, however, comes not from an academic but from the English novelist Tom McCarthy. Before he became famous as the author of Remainder and C — the latter of which was shortlisted for the Booker Prize last year — he published a short book called Tintin and the Secret of Literature. Here, McCarthy presents Hergé's work as one of the great literary achievements of the 20th century."

The very next day, McCarthy delivered his verdict on the movie in the Guardian: "Steven Spielberg's adaptation is not just a failure; it is an assault on a great body of art so thuggishly moronic as to make one genuinely depressed." Several angry paragraph's later: "Perhaps this movie will be studied, in years to come, as a Žižekian example of a dominant ideology's capacity to recuperate its own negation, or something along those lines. For now, we just have to wonder how Spielberg went so wrong, or if he was in fact involved at all: so badly put together is this film that it's easier, and perhaps more comforting, to imagine a semi-simian marketing committee writing and producing it under the banner of his name. If your children love the Tintin books — or, more to the point, if they have an ounce of intelligence or imagination in their bodies — don't take them to see this truly execrable offering."

One of the Guardian's regular film critics, Peter Bradshaw, was less harsh, but still: "This Tintin is a spirited and amiably intentioned green-screen spectacular, but the motion-capture animation makes all the characters look like Ronseal marionettes. It's a photoreal approximation of live action that is technically outstanding, but it has, for me, none of the charm, clarity and style of Hergé's drawings and none of the immediacy and panache of actual, flesh-and-blood human beings." By the end of that week, Tintin had been battered about severely four times in the Guardian (previously up at bat: Xan Brooks and Nicholas Lezard), prompting Phil Hoad to take a longer view of the oeuvre: "Has Steven Spielberg lost his mojo?"

Time Out London's Tom Huddleston was considerably more enthusiastic: "Spielberg and a crack team of British comedy writers – Joe Cornish, Edgar Wright, Steven Moffat – fill the screen with wonderfully bizarre and memorable characters, chiefly the inimitable Captain Haddock, a floundering, whisky-breathed soak gloriously realized by Andy Serkis. And while this means a few characters get overlooked — we never get a handle on Daniel Craig's moustache-twirlingly villainous Sakharine, for instance — it does make for a notable absence of dull moments."

For David Jays, "the dauntless protagonist is a problem. While Pixar animations can persuade audiences to invest emotion in a clownfish, toy cowboy or tidy-minded robot, Tintin's righteous pluck keeps anxiety at bay. A hero who can bring down a plane with a single bullet doesn't need us to will him on." Also in Sight & Sound, Ian Christie sketches a history of the debate over 3D, which is practically as old as cinema itself: "Louis Lumière, creator of the Cinématographe, always believed that moving pictures should be available stereoscopically and in color, and he continued working on this until the 1930s, when he finally produced a range of demonstration pieces." In 1948, Sergei Eisenstein wondered, "Will the cinema of the future be stereoscopic?" 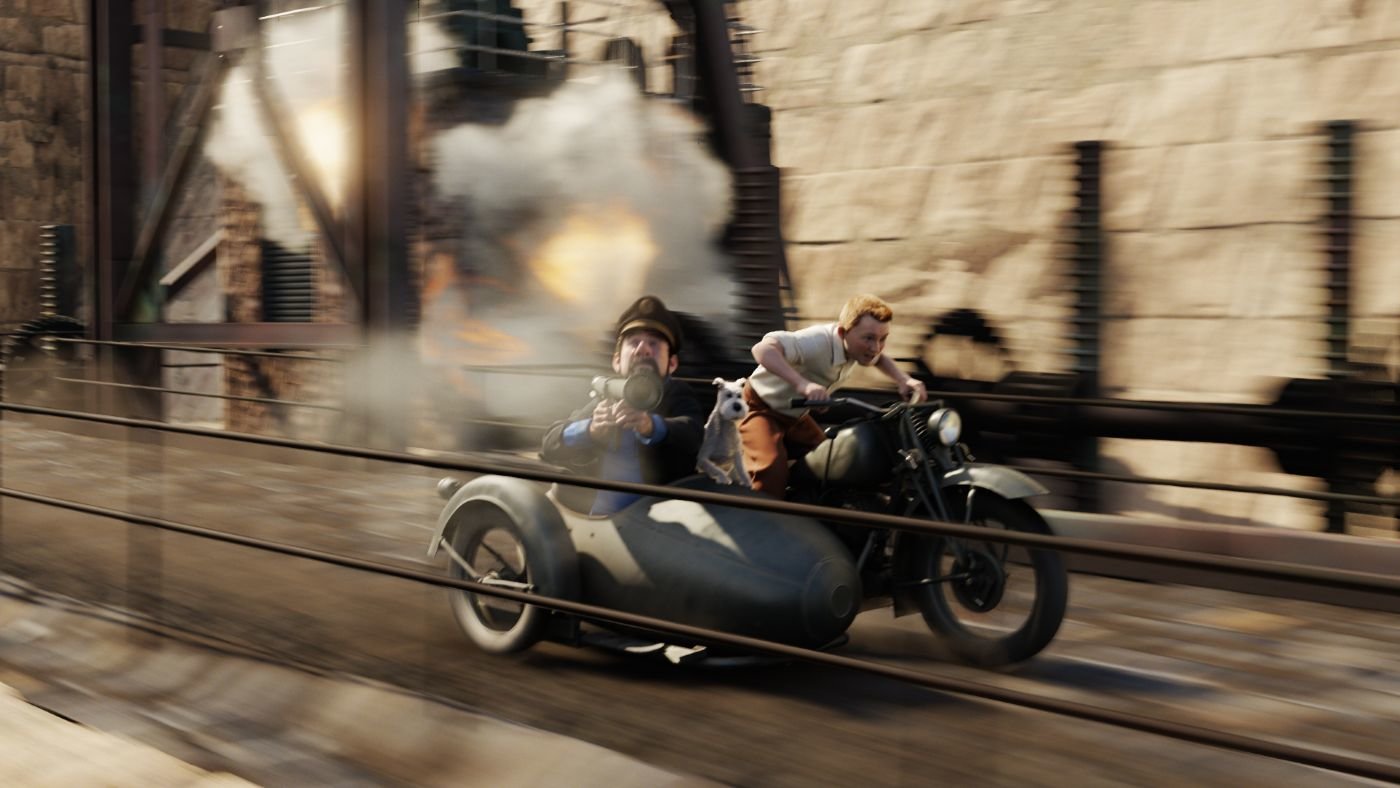 "While Spielberg's use of 3D is nearly indiscernible — too flat at times, so immersive I only rarely noticed that it was present — his 'human' CG treatment is a small wonder to behold," writes Jen Yamato for Movieline, bringing us up to last Thursday in Los Angeles. "Tintin may not look like Jamie Bell, but he feels like Bell beneath his veneer of uncanny valley-skirting CGI. Polar Express this is not; faces look simultaneously human-like and cartoonish, but capture an essential spark of life — even in the expressive face of Snowy, the dog."

"To say that I've read each Tintin book I own about 100 times is an understatement," writes Katie Datko at the AFI FEST tumblr. "Some of them I can probably quote from memory…. The overall verdict from the point of view of a Tintin geek is this: unless you are the most ardent aficionado hellbent on finding fault with the film, you will find The Adventures of Tintin attention grabbing, entertaining and lively."

This is "the first movie Spielberg has made since the truly awful Indiana Jones sequel, The Kingdom of the Crystal Skull," notes Tim Grierson, "and it's a relief that his new film finds him regaining his bearings after that debacle. Unfortunately, Tintin doesn't have the crackle of Spielberg's best recent action-thrillers, Minority Report or War of the Worlds. Granted, Tintin is geared to a family audience, but while some of its action sequences are nicely done, there isn't enough of the sustained ingenuity that's been the hallmark of his work, even in his later years."

The BBC's Tim Masters reports that Peter Jackson "is set to direct the Tintin sequel once he has finished work on The Hobbit."﻿

For news and tips throughout the day every day, follow @thedailyMUBI on Twitter and/or the RSS feed.﻿﻿﻿﻿﻿﻿﻿﻿﻿﻿﻿﻿