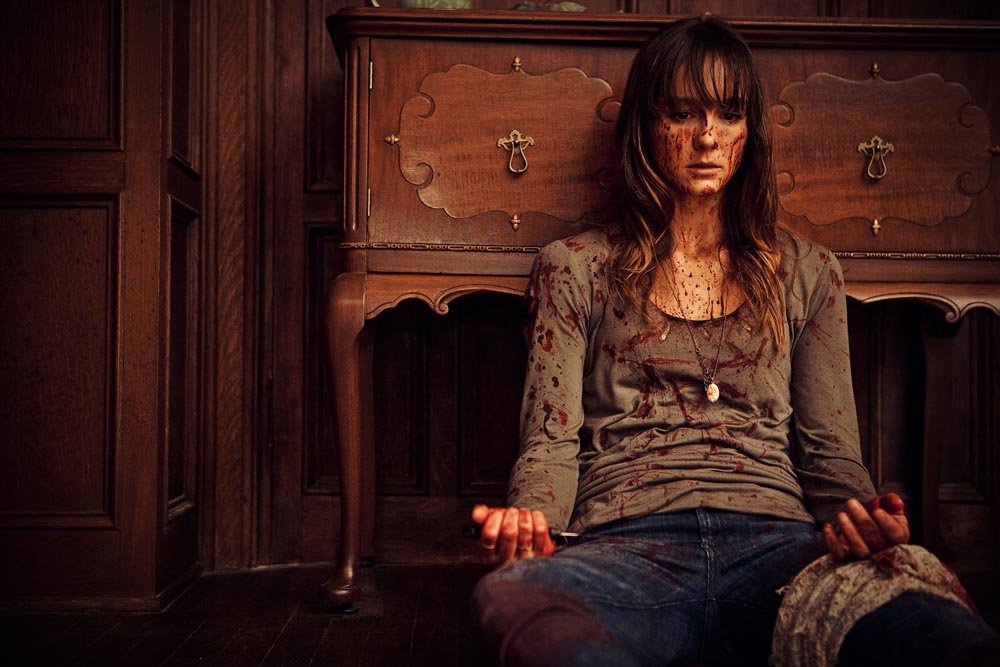 "Acquired by Lionsgate and pulled from all but one of its screenings at the festival, the crowd-pleasing horror-comedy You're Next still killed at the Fantastic Fest 2011 Awards," reports IFC's Matt Singer. "The story of a couple trapped in a remote house by crazed animal-mask-wearing killers won four awards: Best Horror Feature, Best Director (Adam Wingard), Best Screenplay (Simon Barrett), and Best Actress (Sharni Vinson). Unofficially, it also won my award for Best Defacement of the Alamo Drafthouse."

"Adam Wingard has been making fresh and satisfying genre movies for years," writes Filmmaker's Scott Macaulay. "His Pop Skull is a twitchy, glitchy take on addiction made for only $3,000 that suggested a cross between Lodge Kerrigan and Gaspar Noé. Last year's A Horrible Way to Die grafted 12-step psychology onto the story of a serial killer. His new You're Next, realized on a considerably larger budget, is more straightforward — a noir-inflected home-invasion thriller in the vein of the recent The Strangers. What's new, though, is the balance between gore and humor. After a chillingly violent preamble, the movie opens with an indie-film staple: the family reunion scene, in which several sets of sibling couples return home for the holidays. The parents couldn't be nicer, but rivalries exist among the kids. (Joe Swanberg, one of several directors featured as actors in this film, is most engagingly smarmy as the strait-laced, passive-aggressive creep.) And then, just as dinner arguments escalate, a crossbow arrow slices through the window, killing one of the dinner guests."

"Using many of the same actors from Horrible, this time around Wingard creates a more tautly wound horror film, and a genuinely terrifying one at that," writes Kiva Reardon in Cinema Scope. "You're Next seamlessly evolves into a dark comedy, purposefully exposing horror genre conventions (most notably in its use of sound) and reflexively mocking itself (not to mention indie filmmakers)…. But beneath this humour there lingers a palpable cynicism — towards family, relationships and even academia — that never allows You're Next to descend into a mere spoof. Instead, the film creates both a fresh text from old conventions and fresh kills with innocuous objects."

For the AV Club's Noel Murray, "in the 20 minutes of movie before the massacrin' starts, You're Next is bogged down by generic family squabbling. (It's almost as though Wingard and screenwriter Simon Barrett want us to root for the killers.) Once the action really ramps up, Wingard keeps the proceedings good and gruesome, with a tightly shot, handheld style designed to make the viewer feel confined and disoriented. But isn't that the minimum that should be expected for a movie like this? Wingard and Barrett do pull out a couple of halfway decent twists down the stretch, but the effect of one of those is to turn the bad guys from faceless killing machines to just… bad guys, which reduces the terror level a few degrees."

"You're Next takes the typical slasher survivor girl [Sharni Vinson] and flips things on end by making her into a badass," writes Twitch's Todd Brown. "Fuse a Friday the 13th movie with Home Alone and First Blood with a dash of Thomas Vinterberg's The Celebration and you're in the right neighborhood…. You're Next is this year's Insidious, Stake Land or House of the Devil."